In our previous post we have outlined the discussion about green growth, which revolves around the possibility of decoupling economic growth from emissions, energy and materials consumption. In the next three posts we will see if we have achieved this aforementioned decoupling, starting here with the most urgent need in order to avoid dangerous climate change: decoupling of CO2 emissions.

One of the most dangerous planetary boundaries (Steffen et al., 2015) we face is the disruption of the carbon cycle and the change of the climate it entails. The carbon cycle is disrupted by the emission of CO2 released mainly –but not only– by burning fossil fuels.

The Kaya identity (Kaya & Yokobory, 1997) offers us a simple, yet useful conceptual framework to look at the evolution of CO2 emissions and their causes. Total CO2 emissions are simply the product of population, GDP per capita, energy intensity of GDP (E/GDP) and emissions intensity of energy production (CO2/E), as shown in equation (1).

Figure 1 shows the aggregate (whole world) evolution of these variables between 1970 and 2010. CO2 emissions have been increasing over the whole period. Whilst both the energy intensity of GDP and the emissions intensity of energy production have declined during these 40 years, population and GDP per capita have risen at a higher rate, consequently causing the increase of total CO2 emissions. We can also see that far from getting better, the amount of emissions is speeding up in the first decade of the twenty first century.

Figure 1. Kaya identity: Emissions of CO2 as a function of population, GDP per capita, energy intensity of the GDP and carbon intensity of energy production (index with 1970=100). 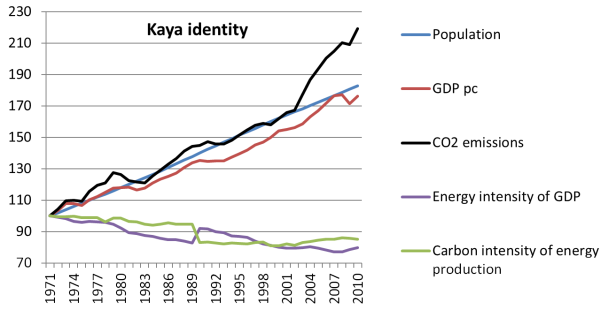 It is important to mention at this point the difference between absolute and relative decoupling. Whilst absolute decoupling entails the reduction of the absolute value of (in this case) total CO2 emissions, relative decoupling only means that the CO2 intensity of GDP improved, without that necessarily entailing the absolute reduction CO2 emissions. An illustration of this difference (for the case of resources) can be seen in Figure 2. 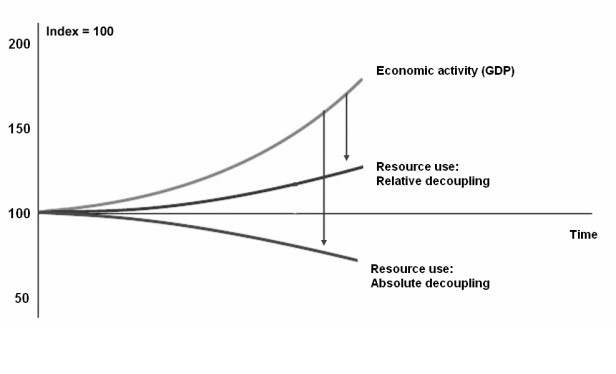 This picture hides the different evolution across countries. If we disaggregated the data by countries or regions, we would see that whilst developing economies have increased emissions dramatically, emissions have stabilized or even declined in developed countries. The Environmental Kuznets Curve hypothesis (Kaika & Zervas, 2013a and 2013b) states that countries pollute more as they increase their income up to a tipping point, since when environmental impact starts actually declining (Fig. 3). 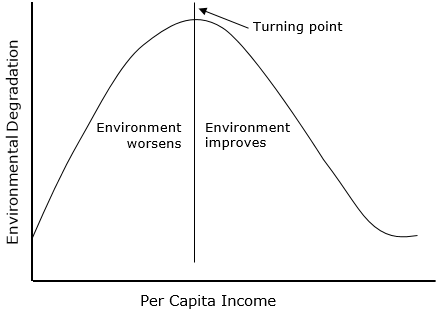 This hypothesis is usually invoked when taking about the success case of declining emissions in the EU, theoretically driven by sustainable development and strict environmental policies. Figure 4 shows how EU-28 emissions have declined since 1990 (pointed line). However, when we differentiate between western and eastern countries we can easily identify three periods in the evolution of CO2 emissions in the EU. In the ’90 emissions declined by 10% in the EU, mainly due to the collapse of the Soviet Union and the subsequent deindustrialization and economic depression of eastern countries which caused, as it can be seen in Figure 4 a dramatic decline in their emissions. In the second period between 1990 and 2007 emissions stabilized at 90% levels with respect to 1990. It was only with the economic crisis in 2008 and the subsequent economic stagnation when emissions started to drop again in both eastern and western countries. 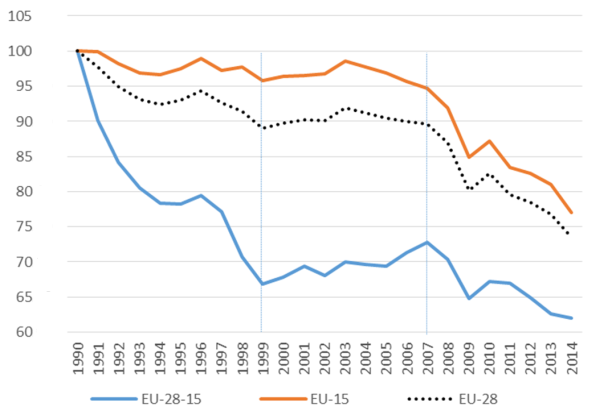 Besides that, CO2 emissions are usually measured from a production approach, i.e. the CO2 released in the production of goods and services. However, as we know, developed countries have experienced in the last decades a process of delocalization of production due to labour cost differentials towards developing countries. That means that instead of producing the stuff we consume, we just buy it from abroad. By importing emission intensive products, we are exporting the pollution their production entails. Therefore, when we look at the emissions from the point of view of consumption instead of production, we find that emissions have not declined, but actually increased not only in developing but also in developed countries (Peters et al., 2015). Figure 5 shows the CO2 emissions embedded in international trade. We can clearly see that the USA, the EU and Japan are the main importers of products-embedded carbon emissions, released elsewhere (mainly China, Russia and the Arabian peninsula) but embodied in products consumed in developed countries.

In conclusion, although we have decreased energy intensity of GDP and carbon intensity of energy production and therefore achieved relative decoupling, we have not been able to reach absolute decoupling, i.e. reduction of total emissions and economic growth. Besides, the Environmental Kuznets Curve does not seem to apply even to the most progressive regions in terms of environmental policies (EU) when we look, on one hand, at the causes of the emissions reductions (collapse of the USSR in the ’90 and economic stagnation since 2008) and on the other hand at the consumption-based emissions. We cannot conclude that the current policies are achieving the goal of absolute decoupling, and that therefore economic growth and emission reductions are compatible goals under the current economic conditions.