The Intergovernmental Panel on Climate Change (IPCC) is in the midst of preparing its 6th Assessment Report (AR6). This report – actually a series of reports, published over the course of 2021 and 2022 – outlines the state of the art regarding the science of climate change, as well as strategies for adaptation and mitigation.

IPCC Assessment Reports are important publications: they constitute an authoritative reference of the prevailing findings and views about climate change within the scholarly community. The sixth assessment cycle will conclude with the publication of a Synthesis Report, specifically addressed to policymakers. Writing this report, in terms endorsed by delegates from all member states, is no easy task. As John Broome, one of the philosophers (alongside University of Graz’s Prof. Lukas Meyer) who was a lead author of the previous Assessment Report, AR5, recounts in this witty contribution to The Philosopher’s Magazine, the process of drafting the Synthesis Report is highly politicized. Clearly, when it comes to IPCC reports, it’s not just the science that matters. How issues are framed is of the utmost importance.

Given the salience of language and terminology, it is worthwhile to reflect on the current linguistic conventions adopted by the IPCC. One such convention pertains to the communication of uncertainty. The IPCC has standardized its uncertainty vocabulary, as outlined in the panel’s guidance note for lead authors of AR5. This standardized language comprises, on the one hand, a confidence scale. The level of confidence the IPCC puts in the validity of its findings is a function of the quality of the evidence as well as the degree of agreement within the community of relevant experts.

For instance, the IPCC’s 2018 Special Report on the impacts of global warming of 1.5°C above pre-industrial levels contains the following headline statement:

Being familiar with the IPCC’s confidence scale, we can infer that there is solid evidence and substantial scientific consensus regarding the truth of this assertion.

Apart from its confidence scale, the IPCC-vocabulary also contains a likelihood scale. Whereas the confidence scale is based on input that cannot be easily quantified, the likelihood scale prescribes standardized terms that refer to quantified measures of uncertainty, typically based on a statistical analysis of observations or model results. Each of these likelihood terms corresponds to a specific probability range: 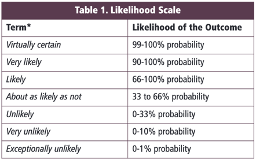 The IPCC’s “calibrated terminology” is quite helpful: it generates consistency throughout the reports of each assessment cycle, and provides many of the readers of the reports, including policymakers and journalists, with an indispensable aid for interpreting the significance of key findings. But the terminological conventions the IPCC employs should not be embraced uncritically. Do these labels give rise to accurate interpretations?

Consider high-impact climate events, with a vague but non-negligible probability of occurring – say, the collapse of the West Antarctic Ice Sheet, or an overturning of the deep ocean currents of the Atlantic Ocean. Adopting the IPCC’s jargon, the occurrence of these high-impact events may be labelled as “unlikely” or “very unlikely”, especially over the next few decades. But do these labels convey the right message to policymakers? They may be taken to suggest that the prospect of these events is of no pressing concern. However, given their impact, arguably these events should be of major concern, if the probability of their occurrence is non-negligible. And a probability range of 0–10% is rather wide: it spans all the way from the impossible to the fairly mundane. Would you bet your life on it, if you faced a 0–10% probability range of losing the bet?

The likelihood terminology of the IPCC is geared to what is most likely to happen, instead of focusing on realistic possibilities. It orients the attention of policymakers towards those events of which our present scientific understanding is most robust, and which, as a result, are supported by high levels of probability. This facilitates shying away from high-impact risks, of which the probabilities cannot easily be assessed. Yet many of the events that worry climate scientists are precisely of this kind: tipping points couched in substantial uncertainty, but potentially very damaging.

What if, instead of being “very unlikely” (as it was dubbed in the Synthesis Report of AR5), an overturning of the Atlantic Thermohaline circulation had been presented as a “possibility that cannot be excluded”, especially going beyond the 21st century? Such a formulation seems to be more in synch with scientists’ actual understanding, including the uncertainty that besets it. Moreover, it seems preferable in moral terms, as this formulation emphasizes – rather than downplays – a climate event which could provoke major changes in the Earth’s climate system, with adverse effects on human societies.

“Natural language is not adequate for propagating and communicating uncertainty,” the IPCC states in another AR5 chapter. That may be true, but only up to a point, for natural language is quite rich and flexible. It can convey nuances that numbers cannot. Wording matters. An important task for the IPCC, in the course of its 6th assessment cycle and beyond, will be to further refine its uncertainty vocabulary, making the concepts it employs dovetail with the aims it wants to achieve.